An Update on the PETITION for Poe & Dante 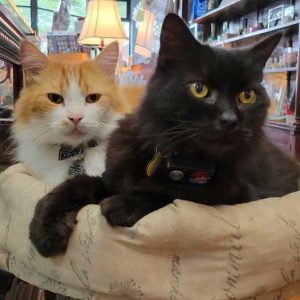 Tuesday August 3rd: the court case has been postponed until September.

Monday August 2nd: Thank you to the 800+ people who signed the petition!

The petition is now closed.

The court appearance is Tuesday morning at 9 AM.

Poe and Dante, the Horton Bookstore cats, are in trouble. They could use a big dose of community love and support.
These adorable creatures are arguably the best-known and most popular felines in Carroll County. They, along with their sister Savannah, have lived for many years at the bookstore on Adamson Square in downtown Carrollton and are a local institution. Poe is so famous that Horton’s has even sold t-shirts bearing his likeness.

The trouble began in late June, when someone claimed that Poe and Dante attacked a dog being walked on a leash on the square near the bookstore. Animal control was called in and issued citations in connection with the complaint. The cats were required to quarantine in the store basement for a period of days and are currently confined to the store. Owner Dorothy Pittman must appear in magistrate court on Tuesday, August 3rd.

Poe and Dante’s neighbors and friends are at a loss to understand what could have actually happened during the incident. These cats are very well socialized and there has never before been a single complaint about their behavior. They have been wandering around the square and interacting with dogs, cats, and humans of all shapes and sizes their whole lives. They have taken part in countless bookstore events, even patiently tolerating being dressed in Harry Potter costumes. When the humane society holds adoption events in front of the store, Dante and Poe enjoy hanging out with the shelter dogs. It sometimes seems as if half the dogs in Carroll County visit the square during Mayfest, and Dante and Poe take all that activity in stride as well. It makes absolutely no sense to anyone who knows Poe and Dante to think they would ever be the aggressor against a dog.

Therefore, fans of Dante and Poe want to register their support for these beloved ambassadors for downtown Carrollton and to do whatever we can to make sure they are able to return to their peaceful lives on the Square. If you want to be a part of this movement, please sign the “I Stand with Poe and Dante” petition.

I STAND WITH POE AND DANTE!
We, the undersigned, want to register our strong support for the beloved ambassadors of downtown Carrollton, the Horton Bookstore Cats Poe and Dante.

We want to see them exonerated of these charges, as we cannot imagine these affectionate, well-behaved, well-socialized cats ever being the instigators in a confrontation with a dog on a leash. Given Poe and Dante’s long history of good feline citizenship, we feel they should be given the benefit of every doubt.

With this unfortunate incident behind them, we want Dante and Poe to be allowed to resume their happy, peaceful lives as Horton’s Books and Gifts mascots and “top cats” of Adamson Square.

THE PETITION IS CLOSED.

Empty Pet Bowl Food Pantry.
Food will be distributed at 102 Tuggle Street, our headquarters, on the second and fourth Saturday of the month from Noon until 4pm.